I had a call from a client recently who had a really successful launch of a recognition program. One of the most successful corporate launches to date! However, just a year later, participation and engagement had drastically fallen. She was disheartened and wondered what she had done wrong.

So many of my clients work incredibly hard to bring a new recognition initiative to the workplace but are surprised to see how easy it is to lose momentum. But think about it. Most of us get excited about starting something, especially when it gets resources, attention, and support. But like many corporate initiatives, once the launch happens, attention and focus move elsewhere; there are just so many competing priorities. There are so many distractions in our work life and those the program is designed to support. So expecting this, and not judging yourself (or your culture) if the momentum wanes allows you to question: What has worked and what could be tweaked to revitalize our recognition efforts?

Like any corporate or team initiative, your program needs to stay fresh, consistent and meaningful. Here are some simple, easy tools and strategies to keep recognition momentum going in your workplace!

You may have a board for people to write kudos cards to each other. 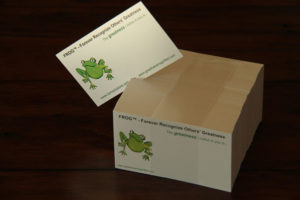 Some ways to keep it fresh and know it’s current is to have folks date them. Make them visible (for example, BestBuy has them in a public area). And mix it up (take a leaf out of Home Depot’s book) by having people turn the kudos card over with the person’s name on the back; it allows anyone to see if new kudos have been added lately and it also creates a buzz, “Hey Larry, on your way to break check out the board…someone left you a note!”

Another tradition some Home Depot stores do is to have a team-based award. At the weekly stand-up meeting, a department that was recognized the week before passes the team trophy to the next department. It allows your high performing teams to be looking for examples of great teamwork, collaboration, and service (anything you want to see more of) to choose which department is most deserving of recognition. It also motivates teams to earn recognition.

Some inspired leaders at North York General Hospital, after doing some training on recognition, realized that they had the perfect way to make Patient Safety Week real, not just for the staff and physicians at NYGH, but also for the patients and families they served. They posted a sign about it being Patient Safety Week and requested everyone write down someone or a team who practiced safe patient care. They provided little frog cut-outs and markers to write down these comments as well as tape to attach them to the windows in the front lobby. Not only were staff and physicians using that opportunity to celebrate their colleagues, but they were touched when they read, or someone told them to go read, about a comment posted about them. The windows were covered by the end of the week. People and teams were allowed to keep their frogs at the end of the week if they wanted to (how nice to look at it later) and it created a ripple effect of folks recognizing other things that were working in their teams and in others well after the week was over.

Meetings usually make people roll their eyes and scour their brains for an excuse to not go. But what if it wasn’t something to dread? Whether it’s a daily huddle, monthly team meeting, annual planning event, or awards ceremony, imagine if the first thing was to ask people to reflect on what was working, who deserves acknowledgment and successes? It begins your meeting with positivity, but clients who have adopted this have also found there is a higher attendance rate, less complaining and more creative solution-finding. A perfect example is St. Joseph’s Hospital in Toronto. At a quarterly staff breakfast, everyone received cards with the organization’s core values. Individuals were asked to write a person or team that demonstrates it and specifically how. These were posted and then distributed to the recipient of the recognition. It brought energy and commitment to more recognition throughout the organization as well as helped people connect to how they live the values of the organization.

What strategy do you think you would like to try in your team or organization to freshen up recognition? And do you have some other ideas of what has worked? Will you share it with us in the comments below?

For more recognition ideas and tools for your workplace, why not check out this link on my website or tune in daily for a tip here.