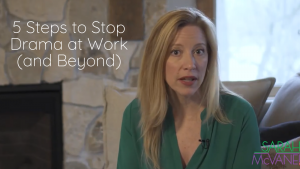 And no, I’m not talking Netflix binge-watching kind of drama (we can talk about that too, but first…) I’m talking about drama in your workplace and life that deflates, drains and distracts you.

It might be the far end of the toxic spectrum such as bullying and other forms of incivility that create a lack of psychological safety. It might be at the other end of the spectrum, such as low grade petty, distracting or annoying interpersonal dynamics. Either way, it’s unnecessary and it’s negatively impacting you. It’s costing you your focus, time, and possibly even your sleep, health or mental wellbeing.

Like any drama, there are actors, and we all play a part (in fact for an interesting take on this theory, check out this video) The question is, are you willing to play a proactive part in addressing the drama? If so, I have some tools for you.

The following is a formula I created by reflecting on having worked with over 100 teams in my organizational development career. Every step I discuss below takes a small step toward rebuilding trust. Toward focus rather than unnecessary distraction. Toward energy rather than exhaustion. We can easily remember how to deal with drama using the acronym DRAMA:

D stands for ‘do something’ about it. Most of us allow drama to perpetuate because we ignore it. Actually, more often we tell ourselves we will ignore it, but actually what we’re ignoring is dealing with it directly and instead process it inward – worrying, ruminating, stressing – or process it outwardly – gossipping, avoiding, complaining. When you feel psychologically unsafe, exhausted or perceive a power differential, it’s understandable you want to ignore it. However, it’s only going to get worse if we don’t fix the root cause. We need to call it out. We need to talk about it with the person. Or we need to blow the whistle on someone in a confidential safe space. We need to acknowledge there is drama happening to ourselves. We need to put it on a team meeting agenda. To do nothing ironically fuels the drama. 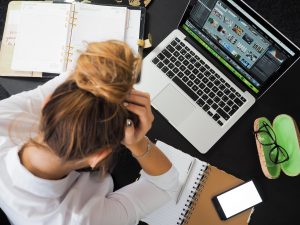 The R stands for recognize, which I know sounds counterintuitive. What is there to recognize when there’s a negative drama cycle happening? However, 98% of the time, even when somebody is behaving badly, there are things that we could acknowledge about their greatness. We talk about how a complaint is a poorly worded request like in our book Forever Recognize Others’ Greatness, and we mean that authentically. People who are engaged in drama have a lot of energy, and it’s often poorly channeled. They are contributing, just unfortunately in a very unresourceful, unhealthy way. We can actually flip that focus and the energy that they’re exerting to something that is healthier and more resourceful when we jar them out of the drama cycle by recognizing something that’s positive about them or the situation. And the easiest way to begin that flip is by recognizing them.

A is to articulate. Articulate a different perspective, a different view, a different future. What would you like your team, your environment, your relationships, to be like? What might an anti-drama situation be like, feel like, and taste like for you and others? If people can’t envision it, and if they don’t think it’s possible, how are they ever going to get onboard to move towards that? Frankly, you need to be able to articulate what this desired future looks like for yourself so that you can hold the faith something else is possible and assert yourself to others about what you are willing (and not willing) to accept. 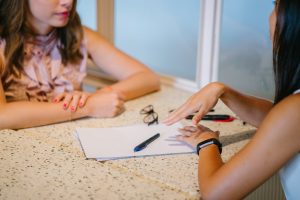 M is meaning. When we believe our role has meaning, we’re more likely to contribute in a resourceful way. I’ve often found people who engage in drama (bully, pick fights, spread rumours) are lacking a clear sense of meaning and purpose in their role. On the outside, it may seem this isn’t an issue, however, the more lost, bored, uncertain and threatened someone is, the more likely drama will fill the void. Negativity breeds more negativity. Remove the negativity with ensuring everyone is explicitly clear how they and their role uniquely and importantly contribute to the greater good, and you have less time, energy and desire to engage in drama. Meaning is drama disinfectant.

Finally, the last A is to take action. And action doesn’t mean it’s all on your shoulders. You may need support, and your role in action is to rally support, report an incident, review a policy, call someone out on their behaviour, set expectations, change your schedule, or countless other options available to you. The key thing to remember is that you have a choice. When we’re caught up in the drama, especially when we take on the role of victim, we don’t see or act on our options. Or sometimes we know we have a choice but think it’s not fair. Thay may be true, but now is not the time to let fairness at the moment with the long-term health of your work and life.

Leaders, here’s one more thought for you. People need to believe you’re taking action, even if you cannot tell them what action you’re taking. You might say something like: “Please trust me when I say that I am working on it and that I am doing absolutely everything in my power to address this.” If you’re worried people won’t see an impact or it will take a while, you may wish to acknowledge this outright.

Remember, everyone is an actor in this play. What role do you want to play? What will be your next step? If you want others to be part of this drama-free movement, why don’t you share this video? And in fact, don’t miss a video by subscribing to this YouTube channel. Thank you so much, and hope you have an amazing day.

Want to check out more resources about how you can recognize other’s greatness? Check out these articles: